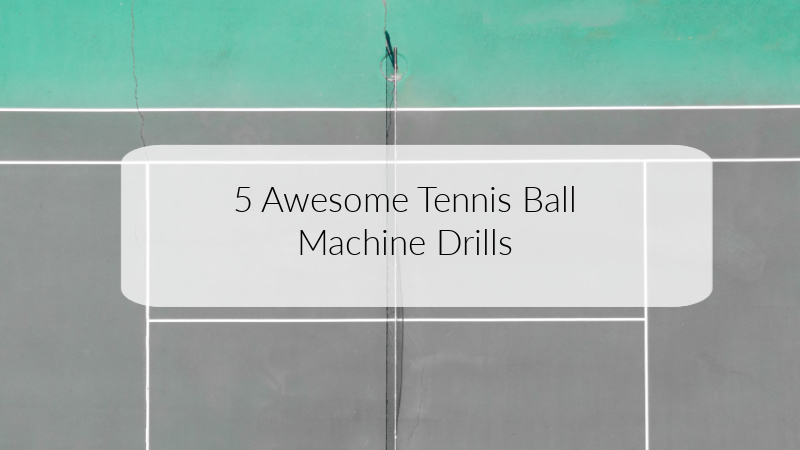 It’s not always easy to find the right training partner to help you improve your tennis skills. Coordinating schedules can be a cumbersome task, especially if you want to establish a proper training routine. It may also happen that you find yourself with some free time you’d like to use to train your game, only to find that your partner is busy at that very moment.

If your partner’s level of tennis isn’t as advanced as yours, you’ll probably feel like you’re not getting as much out of these sessions as you’d like to. Ideally, your opponent should keep you on your toes, and allow you to train the moves you aim to improve during a workout session. If their level is lower than yours, you’ll quickly get bored and end the practice feeling that you haven’t really developed your skills. If their level is much higher, you won’t get much of a chance to improve your game, and you’ll end up feeling frustrated.

Fortunately, there is a solution! Believe it or not, but there really is no better training partner than a tennis ball machine. The features on these machines allow you to adjust the game to your needs and objectives, both in terms of speed and when practicing specific movements and strokes. You’ll notice your game improving consistently after just a few sessions, allowing you to repeat the same shot over and over again without interruption.

If you are looking for an opponent who is always available, who will allow you to get the most out of your training time and who will help you be on top of your game, you won’t find anyone better suited than a tennis ball machine. Below you can find a series of routines that will help you reach your full potential and become the master of the court, by focusing on specific aspects of your game.

1. Improving Your Basic Stroke: Balls to the Same Point

The first and simplest of these routines consists of programming the machine to throw flat balls to the same point of the court. Start by positioning the machine in the middle of the opposite service line and configure it to throw straight shots every 10 seconds with no oscillation. Position yourself at your service line and practice your forehand or backhand by hitting those balls back. To improve your stroke direction, try to hit the balls so they land as close to the tennis ball machine as possible.

Lastly, depending on the type of stroke you’re practising, position yourself in your forehand or backhand corner and the machine in the opposite corner of the court. As it fires balls at you every 10-15 seconds, aim to make them land as close as possible to the machine again. After landing 20 successful balls, start the whole process from the beginning.

Place the machine in the middle of the opposite baseline and change the setting so it feeds balls to both sides of the tennis court alternatively and consistently. Since you will be alternating between forehands and backhands, this exercise allows you to practice the movements needed in preparation for a stroke.

This routine is divided in two parts. Firstly, you’ll want to practice short distance by programming the machine to fire a ball every 5-10 seconds. Position yourself in the middle of the service line, and really focus on your movement and position before each stroke. After 50 strokes, move back to the baseline centre mark, and set the machine to a firing speed of 10-15 seconds.

For the second part of this routine, keep in mind you’ll need to be running from one side of the court to the other to hit those balls. If you need to, you can skip one of every 10-15 balls, to make sure you don’t end up completely out of breath. After another 50 strokes, move back to the service line and start from the beginning.

This exercise is especially suitable for those looking to improve their doubles game. Position the tennis ball machine at the baseline centre mark and, depending on your expertise and how challenging you want the routine to be, turn up the speed dial. You can either have the machine feed balls to the centre of the court or, for an additional challenge, activate the 2-line oscillation.

Position yourself midway of the centre service line and start drilling your volleys. Try to alternate between angle volleys and deep volleys. The latter are often overlooked by tennis players during practice, but they can prove to be an inestimable tool when playing doubles, allowing you to take time away from your opponents.

4. Improve Your Lob Defence: The Smasher

A lob stroke can provide an excellent opportunity to bring a tennis game back in your favour, either by taking the opponent by surprise or by letting the hitter have the extra time to find that invaluable position at the net and dominate their adversary. But, if properly countered, it can be disastrous for the player using it. This exercise will help you improve your lob defence and make sure you have the right response when it is used against you.

Place yourself at your service line and set up the tennis ball machine at the centre of the opposite one. Program the machine to lob the ball in your direction, with a firing speed of 5-8 seconds and vertical oscillation activated (if available). To make things a bit more interesting, you can activate the 2-line horizontal oscillation for an extra challenge.

You can add an extra step to this drill to improve your stamina, all the while improving your lob defence. To do this, either run to the net and back or to the baseline and back between every shot, focusing on your posture before making that next stroke. If necessary, you can lower the firing speed to 10-12 seconds.

5. Improve Your Endurance: The Runner

For this drill, place the ball machine at the centre of the opposite baseline and have it consistently fire balls to a specific place in the field, on a very low firing speed (20-30 seconds between balls). Each time you return a ball, run a lap around the field and come back into position before the next one comes your way. Every now and then, take a rest for one/two balls before getting started again.

This is a very exhausting exercise, but it is particularly beneficial in terms of improving your endurance. It will help you reach that fourth or fifth set with enough energy to keep going. By practicing your forehands and backhands in these wearing conditions, you’ll make sure you never lose a game due to fatigue!