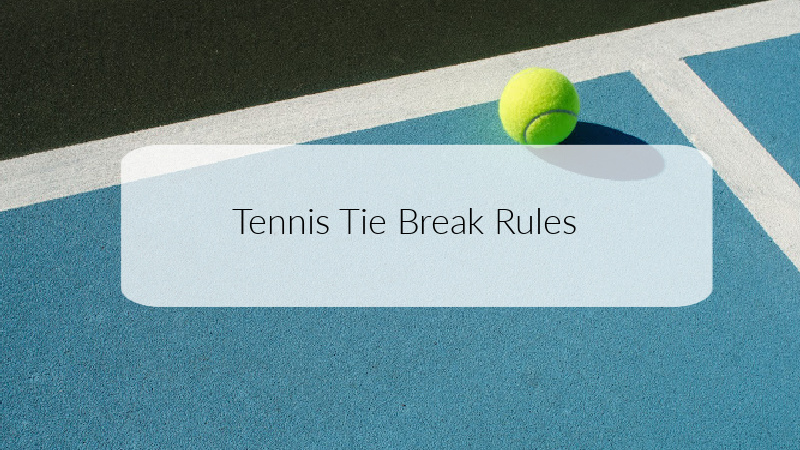 When Tennis matches are too close to call and both players seem to be equal in terms of skill level, a tie-break situation may occur. This practice is not exclusive to the game of tennis and is used in other sports, however, in tennis, there are specific rules and conditions that define a tie-break or tiebreaker match.

Tennis is scored based on games, sets and matches. Each game is part of a “set” that requires players to win at least six matches in order to be victorious. Generally speaking, matches comprise of two or occasionally 3 sets, though this can vary.

Unlike football or rugby, where points are counted up in equal amounts for each consecutive goal or try, tennis works quite differently. The first point in a game is worth 15, the second is worth 30, the third is worth 40 and any points scored after this declare the player the winner.

In the case of two players both having won 3 points, the umpire will call deuce, which means they are both equal. Following this, the next point a player scores will give them the “advantage” and if they can successfully score another point after this, the game is theirs.

If players are very evenly matched and continue to score against each other consistently, this can create a situation where there is no clear winner, even after two or 3 full sets. In this case, a tiebreak situation is declared.

Unlike standard games, the tiebreak tennis match is scored a little differently. Players are still awarded points for each successful play in a game and points per game won, but the first person to reach seven will win both the tiebreak and the set.

This can create a very tense and unpredictable situation for both the crowd and the players themselves. After playing for a while, energy reserves will be low and it becomes far easier to make mistakes or misjudge shots.

Points in a tiebreak match are awarded one at a time from zero to seven. A player must have a clear two-point lead over their opponent to be declared the winner in this situation.

In some cases, players may have been awarded six points each, which always makes for an exciting finale to a game as the winner will then be the player who manages to score twice in a row.

Order of play and details of the tiebreaker

The player who served last will be allowed to go first and play the first ball in the set.

Following this, the other player is allowed to serve the next two points.

Turns are then taken after every 2 points.

Traditionally, when the score reaches six, tennis players swap sides and play from the opposite end of the court. This practice dates back to the birth of the game and keeps players alert, it also means that one person can not take advantage of performing better on one side of the court or the other.

Usually tiebreakers are played in every set of games other than the very last one.

Not as rare as you might think. Over the years there have been some absolutely nail-biting tiebreak matches that kept the crowd on the edge of their seats until the very last second.

In 2013 Benjamin Balleret won an incredible 70 point tiebreak that is arguably one of the longest matches in the history of the sport.

Bjorn Borg is still famous for his breathtaking performance at Wimbledon in 1973 where he defeated Premjit Laal 20 to 18. In women’s tennis, Akgul Amanmuradova is known for her phenomenal performance against Anna Zaja in 2017.

The match took place in Moscow as part of the ITF tournament and ended with a score of 22 to 20, an astonishingly long match for female tennis.

The history of the tiebreak

The phrase tiebreak or tiebreaker is now extremely well known across the globe and is used in all kinds of different sports. In tennis, tiebreaker become shortened to tiebreak by commentators and sports journalists.

The concept was invented in 1965 when the game was starting to grow in popularity across the world. James Van Alen is credited as the first person to introduce this new practice as a way of settling particularly close competitions.

First carried out as an experiment at a tournament that was held in Newport Casino, Rhode Island, USA, he initially suggested that the tiebreak rules would be a best five of seven points or best seven of twelve points.

The modern day version, also known as the twelve point tiebreaker, was the most popular version of this practice that Van Alen proposed. In 1971, the famous and much revered Wimbledon tennis tournament, held in London, England, adopted the nine-point tiebreaker system, but this was replaced by the more popular 12 point system in 1972.

The applications of the tiebreaker can vary from tournament to tournament, but it is now recognized as an integral part of the game.

Essentially, the tiebreaker or tiebreak was invented to provide closure for particularly close tennis matches. After winning six sets each, the umpire will officially declare a tiebreak situation and the players will be expected to continue serving to each other until one of them has emerged with a clear two-point lead over the other. Crowds love tense, hard-fought tiebreak matches because they push players to their absolute limits. Having already played for up to an hour or more, both competitors will be tired and mentally fatigued, meaning the results of many tiebreak situations are often quite surprising and difficult to predict.