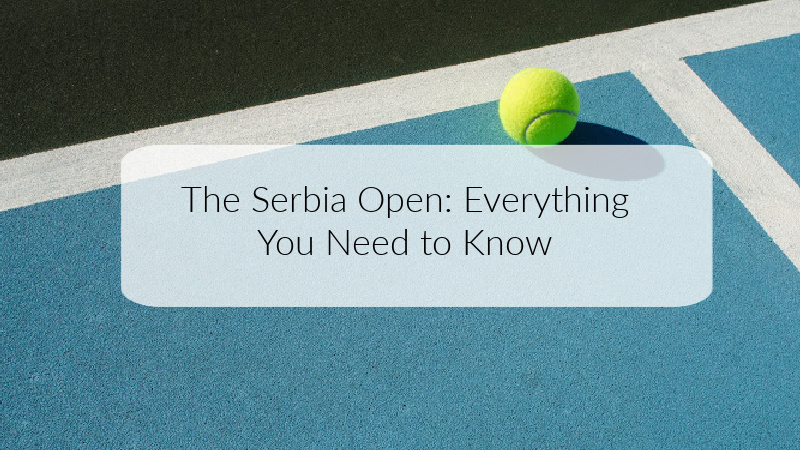 The Serbia Open was an ATP World Tour 250 series men’s tennis tournament. Held for the first time in 2009, the event was played on outdoor clay courts in Belgrade, Serbia.

In 2009, the event ran from the 4th to the 10th of May. In subsequent years, the tournament has commenced on a similar date. As Serbia had never hosted an Association of Tennis Professionals or a Women’s Tennis Association tournament before, the event was a first for the country and put Serbia on the sporting map.

Who Set it Up?

Serbia Open was set up by the family of Novak Djokovic, who still own the tournament today. Through their company, Family Sport, the Djokovic’s purchased the ATP Tour date in 2008 from the organizers of the Dutch Open.

Shortly after, they conversed with the Belgrade authorities and purchased a plot of land to build the venue. Additionally, they convinced the Serbia prime minister, Mirko Cvetković to back the event through the state-owned enterprise, Telekom Srbija.

Who is Novak Djokovic?

Novak Djokovic is a Serbian professional tennis player. Currently, the sportsman is ranked No. 1 (January 2019) in men’s singles tennis by the Association of Tennis Professionals.

Shortly after his victory at the French Open, Djokovic was crowned the eighth player in history to achieve the Career Grand Slam. He also became the third man to hold the four major titles simultaneously.

Djokovic has won numerous awards including the Laureus World Sports Award for Sportsman of the Year in 2012, 2015, and 2016. In 2011, he bagged the BBC Overseas Sports Personality of the Year Award and was the recipient of the Order of Karadorde’s Star, the Order of St. Sava, and the Order of the Republika Srpska. He uses Head tennis equipment.

Why are the Current Serbian Players So Successful?

Since the success of Djokovic, other Serbian tennis players have been climbing the ranks. According to Djokovic, the reasons for their success can be traced back to 1999. At this time, NATO planes bombed Belgrade just before Slobodan Milosevic was removed as president.

At just 12 years old, Djokovic was kept home from school because of the dangerous situation. Consequently, Serbian youngsters had hours of free time to practice tennis and other sports. Djokovic explained that other top players including Jelena Jankovic, Ana Ivanovic,  and Tipsarevic all went through the same situation.

“I think it is a question that has been raised and asked to all of us, for last two, three years, how come you are coming from such a small country with so many problems and you still managed to become top players you know,”

Additionally, Djokovic says that bonds formed during the bombings have given Serbian players a sense of community and purpose.

“As a small country we got united in those critical times and we supported each other and right now that the country is prospering and it has turned its intentions towards the West and I am happy with the situation as it is now,” he added.

Winning the tournament in 2012, Andreas Seppi was the event’s last singles champion. However, the competition has seen a host of other winners over the years.

During it’s running, Serbia Open was a popular competition that saw a host of world-class names. However, in 2013 the tournament was replaced on the ATP schedule by the Power Horse Cup in Düsseldorf. According to reliable sources, the tournament failed to attract major sponsors or top players. In the 2012 edition, even Djokovic himself failed to attend, along with other top Serbian players. Family Sport, the organizers of the tournament, said that canceling the event was the most rational decision considering the circumstances.

Although Serbia Open may have run its course, Novak Djokovic remains a top tennis player.