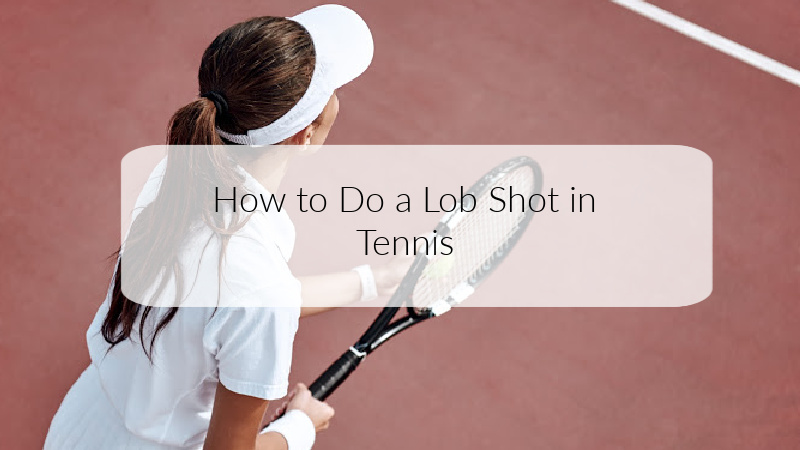 The lob in tennis is one of the hardest shots to master and is usually one that only the more experienced tennis players will achieve when playing someone of good tennis ability. There are two types of lobs – an offensive lob and a defensive lob. The offensive lob is where you are trying to outwit your opponent and score the point, whereas the defensive lob is more about pushing your opponent further back on the court.

To give an overview of what is involved in delivering an offensive lob – it is where the opponent is at the front of the court and you hit the ball over them so they cannot reach the ball. It is extremely difficult for a player to return a lob because they will have to cover a lot of ground to get to the ball and running backwards is much harder than going forwards to return a ball.

The offensive lob is best executed when you have enticed your opponent to the front of the court with a dropshot, making it harder for them to get to your ball placed deep in the back of the court. The change of direction slows them down and it is very hard to return the ball if you are facing the other way (towards the back of their own side of the court).

To be able to hit the ball upwards and to the back of the court against a good opponent, you need to get a descent amount of topspin on the ball. This ensures that it bounces quickly out of the court rather than just hitting the ball so it bounces high in the air and then it giving the opponent lots of time to react to the shot and then send it back.

You need to assess the right time to play an offensive lob, to make sure that the opponent is not able to simply smash the ball if you get it wrong. The best time to execute it is when they have just struggled to get to the net and will not have much time to readjust their feet to get to the back of the court.

When you are playing an offensive lob, your arm will be bent and the angle of the racquet should be steep and you play it like a forehand but drive up the back of the ball to get the topspin onto the ball.

The offensive lob is well used in doubles matches, as it is more difficult to find an area of the court that the two players will not be easily covering.

This type of shot is used when you are in a bit of trouble and you are short on options, so you lob the ball high and long in order to push your opponent back and to buy a bit more time. This type of shot is more likely to be made whilst you are stretching to reach the ball so your arm will be straight and you will probably not be able to get much power into the shot given your limited time. So you are simply hitting the ball towards the back of the court to make the opponent move backwards for the ball.

Once mastered, the lob is a very important tennis shot that can earn you a great deal of points. The better you get at putting a topspin (or even backspin on the ball when appropriate), the greater the chance of your lobs not getting returned by your opponent. So spend a lot of time in practice trying to improve this shot. To practice, ask a training partner to stand at the net with their racquet stretched above their head. Try and hit the ball so it is going over their racquet, using topspin so that it comes down in time to be in.

One of the reasons that the lob is such a good shot to play is that it is quite easy to disguise that you are playing that shot as your opponent will not realise until late on that you have applied topspin on the ball and will therefore be expecting it to land in a different place.