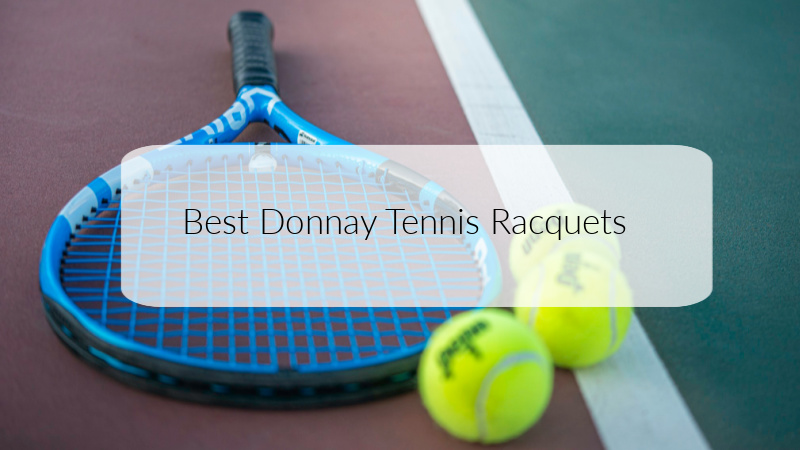 These days, with all the stars of the ATP tour kitted out with gear from Prince, Wilson, Babolat and Head, Donnay doesn’t get much of a look in. But turn the clock back to the 1980s and Donnay was producing the most tennis rackets of any manufacturer in the world. Andre Agassi, Bjorn Borg, Margaret Court, and Rod Laver all ran onto the court with a Donnay racket in their hands.

Why Buy a Donnay Tennis Racket?

Some of those were back in the day when rackets were made of wood, of course. After that, Donnay failed to make the switch over to graphite frames and couldn’t keep up with the latest technology. Other brands pulled ahead and Donnay, for a while, looked on the way out.

Now though, they’re making some great modern raquets and slowly turning their fortunes around. In 2010 they launched their innovative “x-series” of rackets, which offered an alternative design to the traditional hollow-framed racket, dampening vibrations and shocks by up to 35%. There’s a lot that’s impressive about their rackets, and reviewers are increasingly taking notice of the consistent build quality and excellent dampening. Even without a celebrity endorser, Donnay are certainly on the up.

Donnay rackets are thin beamed and stiff, but (most importantly) cushioned and comfortable for volleys and groundstrokes. That’s a godsend to any players prone to, or worried about, wrist and elbow injuries. These distinctive and slightly stiff rackets may not be ideal for beginners, but an intermediate or advanced player with a powerful swing can find an awful lot to like.

Unlike many companies, Donnay don’t do the usual trick of making super expensive, high-tech rackets for pros, and then progressively worse and cheaper offerings for everyone else. All Donnay rackets come in at about the same price point, but which of these you’ll prefer will depend on your taste and play style. So, if you have the opportunity, pick one up and see what you think.

Many tennis fans have fond memories of Bjorn Borg wielding his heavy wooden racket like a club, and this gorgeous retro recreation has all the stylings of the 70s original. Although not made from wood any longer, it is designed to replicate some of the feel of the original whilst being lighter and faster, like the graphite frames that modern players are used to and benefits from a much larger sweet spot.

Built with Donnay’s patented Xenecore technology, the Allwood 102 is super maneuverable, with one of the lowest swing-weights of any racket being produced today. Usually, that involves a sacrifice in power and stability, but the Allwood doesn’t have that problem. The large head size of the 102 comes with a correspondingly large sweet spot to play with, while the flexible and light design of the head negates the air resistance you’d expect to deal with as a result.

Due to its design, this racket won’t help you generate a lot of power if that’s an aspect of your game that you struggle with, but you equally don’t need to be 6’11” inch giant with the reach of Ivo Karlovic to benefit from what the Allwood 102 has to offer. This is great for players who like smashing balls down the baseline, or for recreational doubles players.

Like most of Donnay’s rackets, the Pro One Penta 97 is a heavy-hitter, which doesn’t feel like it. Most players (unless their name rhymes with Foger Rederer) can’t hope to drag a heavy racket through their air and make it look elegant, except maybe with a Donnay Pro One Penta 97.

The 18×20 string pattern makes this much easier to wield and has more power than near-equivalents like the Wilson Pro Staff 97. However, unlike the Pro Staff, the Pro One is also a good option for players who don’t rely wholly on strength. For its size, this racket has a very low swing rate and is easy to control.

Donnay have also added a fifth, foam core to the center of their frames, increasing the ability of Donnay’s rackets to absorb vibrations and shocks. As a result, this is an incredibly comfortable racket to play with, and a great choice for anyone prone to wrist, arm or elbow strain.

This is a fantastic racket for strong hitters who don’t want to have to pay the price in comfort or playability when it comes to their heavyweight style. The 18×20 string pattern also makes this a perfect racket for those who have a more closed stance and like to serve and volley, and those who only make use of moderate spin. If it’s spin you want, check out the 16×19 variant.

The Pentacore light exists for players who want the fantastic playability and comfort of the Penta, but prefer it in a lighter, more easy to handle package. Super light and evenly balanced, this moves through the air with enjoyable speed, whilst maintaining accuracy. The open string pattern (16×19) allows for lots of spin, too. Once again, this Donnay racket excels at vibration absorption, allowing you to generate lots of power and momentum, without feeling the shock running up from your wrist to your shoulder.

The Trademarked Xenecore tubing contained in the frame allows the racket to bend back slightly as it strikes the ball, but then to snap back into position in a nanosecond, launching the ball forward. This creates great power and accuracy, with marvelous stability.

A great racket for players interested in something like the Babolat Pure Drive Light, but wanting more power and control. If you’re a beginner or intermediate player, who likes the sound of Donnay rackets, but find their heavy-hitting credentials a bit intimidating, then the Formula Lite Pentacore 100 may be a good route in.

The solid core of the Superlite 114 generates a huge power boost, and – thanks to its foam-filled Xenecore – still gives you the great vibration and shock absorption that Donnay is known for. Get the big punch you really want, without the painful shocks and jolts along the arm that usually come with it. The foam core also helps to keep everything incredibly airy, so that the Superlite 114 lives up to its name and checks in at a minuscule 240g unstrung. Even with a plus-sized head (114 square inches), you still end up with a maneuverable racket that has a fairly unbeatable swing weight in its class.

The Superlite 114 is ideally suited to lower-level and senior players looking for a racket that can give their game a much-needed power boost. That said, Donnay reckons that a hard-hitting pro could take real advantage of the Superlite’s power and open-string pattern, and generate some impressive topspin. Why not give it a go?

Donnay are certainly the underdogs of the Tennis world; two breaks down in the final set. But after being outstripped technologically in the 90s, they came back with a wave of innovations that put them in a category all of their own. Donnay rackets certainly aren’t for everyone, and their designs have a distinct bias towards heavy-hitters, but there are plenty of powerful players about. More importantly, for a small and emphatic minority, the vibration absorption and cushioning provided by their rackets is a godsend for those who suffer from tennis elbow or any similar condition.

If you’ve never tried a Donnay racket before, have a look. They may well surprise you.