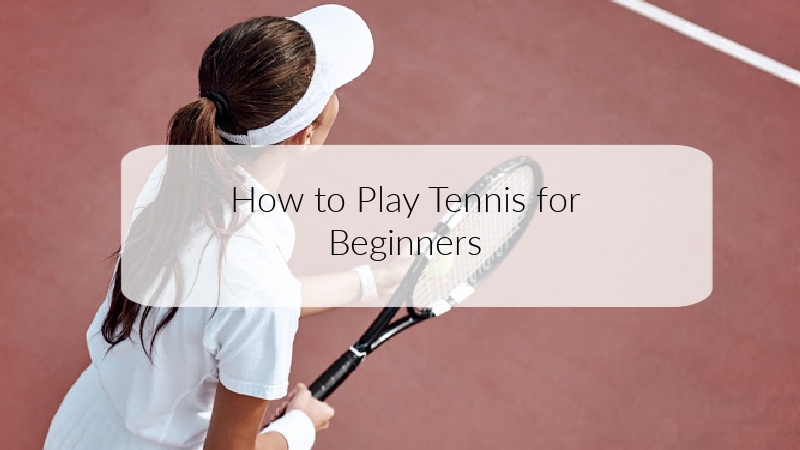 When you’re unsure what you’re doing, tennis can be a tricky sport. However, as soon as you know the basics, it becomes a fast-paced, exciting game that you’ll want to play for hours upon hours.

When playing tennis, you’re always improving. Even Andy Murray improves his technique from game to game. To speed up the learning process and advance your skills, you may want to consider finding a tennis coach. However, having tennis lessons is not crucial to your play.

With time and dedication, including time spent in the gym to keep fit when you’re off the court, it won’t take long for you to learn how to play tennis to a moderate standard. If you have your eye on professional play and tournaments, you should get a coach.

For budding tennis hobbyists, our tips for how to play tennis provide everything you need to begin.

As soon as you know how to score a tennis match, you can start practicing your style of play.

When announcing the score, the server’s score is always said first. For example, if the server has one point and their opponent has none, the score is 15-love. In tennis, ‘love’ means zero.

The scoring system is structured as followed:

If a player is at advantage and their opponent wins a point, they return to deuce and play on.

Read: How To Keep Score In Tennis

A standard tennis court measures 78ft x 27ft and is split down the middle by a court-wide net, but it can feel much bigger or, in some cases, smaller when you’re in play. That’s why it’s crucial to know how to navigate the court.

Either end of the court has white baselines, from which you serve. These lines are also used as ‘out of bounds’ lines, which means, if the ball lands outside them, the person playing the shot loses the point. The same lines appear at the side of the court. Also, at the side of the court are the lines that dictate the type of game you’re playing; if you’re playing a single tennis match, you should use the lines on the inside whereas the lines on the outside should be used for doubles play, to create a wider court.

When playing tennis, often, one of the best ways to improve your technique is to get your opponent moving around the court. By being unpredictable with your style of play, you’ll make it difficult for your opponent to keep up. If you’re constantly making your opponent move from the back of the court to the front and vice-versa, they’ll tire quickly.

The Guardian’s diagram and explanation of the markings of a tennis court is an excellent reference point for further information about navigating a tennis court.

Playing singles and doubles tennis has some specific differences that you must know beforehand.

In a singles match, there are just two opponents; one of either side of the net. The game, and every point, starts with a serve, which is take from behind the baseline (the furthest line at the back of the court). You must serve the ball diagonally, so it lands in the left-hand service court opposite.

The service court is marked by a white line just over half way on either side of the court. Once the serve has been made, play continues until one player fails to hit the ball back or the ball lands out of bounds, in which case the opponent that played the ball will lose the point. You then continue to play until you reach match point.

At the end of the first game and then every-other game (odd-numbered games), the players switch ends of the court.

Playing doubles matches is a little more complicated, predominately because you must navigate your gameplay with your tennis partner in a way that works strategically. However, the rules of doubles tennis are almost the same as singles.

When playing doubles, there are two players on either side of the court that work in unison. The two players and teams take it in turn to serve. For example, if players A and B are on a team and players C and D are on a team, player A would serve first, player C second, player B third, and player D fourth. It’s that simple.

Like singles tennis, at the end of the first game and then every odd-numbered game thereafter, the players switch ends of the court.

When learning how to play tennis, learning to serve properly is crucial as it can make or break a game.

Right-handed players: stand sideways with both feet apart, just behind the baseline. Hold the ball in your left hand and throw the ball straight upwards. The ball should be tossed around one foot in front of your left foot and approximately 40cm in the air, so it’s within reaching distance without too much strain. Then, move your racket back to get some force behind it, and swing it towards the ball. Your racket arm should be straight when it meets the ball. You should aim to hit the tennis ball when it’s at its highest point, moving your body weight from your back foot to your front foot as you do so, to give you enough force for a powerful serving shot. You must aim to strike the ball from just above, towards your opponent’s court. When serving, follow through with your racket, so you complete a full swing.

It is a good idea to practice serving by yourself, without any competition, until you get your swing right. To practice, visit your local tennis court, or mark out an area in your garden, and hit one ball after another, and then repeat.

Read: How To Serve In Tennis: The 6 Steps

Remember, as soon as you’ve served the ball, you need to get into position and be ready to receive the returned ball. There are a variety of shots you can use throughout gameplay, including groundstrokes, which is when you strike the ball after it has bounced once. When striking the ball, you must consider whether to use a forehand or a backhand stroke, which will alter the force of the ball. To learn the difference between strokes, explore ATG’s quick video tutorial.

When choosing your tennis equipment, right down to your clothes, there are a variety of considerations to be made.

Firstly, it’s essential you have a good tennis grip, which will help you to grasp the racket and prevent blistering on your palm. Try a variety of grips to find one that works for you.

When selecting your tennis clothes, like any other sport, you should wear clothes that are comfortable, loose-fitting, and breathable, to keep you cool and help wick away sweat during gameplay. Choose tennis shorts with an elasticated waist and a top with vents under the arms and on the back; these will help to keep you dry throughout the game.

When choosing tennis shoes, you should purchase shoes with a distinct arch, to prevent problems with flat feet, and with a heavily cushioned sole and mesh upper. Combined, these features will ensure you are comfortable, dry, and blister-free.

For both men and women, when playing tennis, underwear is an important consideration. You should wear supportive sports underwear that holds everything in place, therefore preventing injury with excessive game play.

There are hundreds of tennis rackets, tennis balls and racket strings on the market, each suited to different levels of skill. Some of the best tennis brands in 2019 include Wilson, Head, Prince, and Yonex, all of which have equipment varying in price for all types of players. As a novice you should choose a racket that is best for beginners.

With practice, tennis is a rewarding, thrilling sport that will get you moving while relying on strategy. Spend as much time as you can on the court, get the right equipment, and try different types of gameplay; both singles and doubles. Over time, you’ll find your preference. If you want to become a professional, seek a qualified tennis coach near you (UK) or search for one in the US.