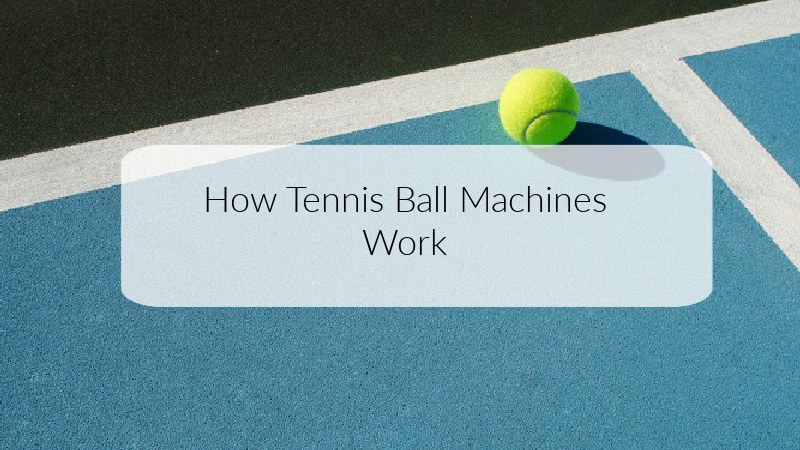 A tennis ball machine might seem simple. After all, all that it does is to lob tennis balls at you. While the principle is simple, the actual mechanics of the machine are a little more involved than that.

The machine needs to be perfectly calibrated so that it sends off each shot at the same speed and at the exact right time.

So if you have read our reviews, decided which one you want and now want to know how it works, this article is for you.

It Needs a Power Supply

It’s air pressure that propels the balls, and for the machine to create the air pressure necessary, it needs to have a power supply. As long as it has power and tennis balls, unlike a human partner, a tennis ball machine can play indefinitely.

In general, there are two power supply options: a battery or a wall plug.

The obvious benefit of having a machine with a power cord is that you can play as long as you want. The downside is that you’ll need to have a set power supply to the court, and you’ll need to be able to plug the machine in.

The benefit of having a battery is that you don’t need to worry about finding a power supply. The better-quality machines will work for around six to eight hours on a single charge.

This is a convenient option if you’re not sure that the court you’re playing on has a power supply. It also solves the problem of having to run a power cord from the main building to the court.

The downside is that you’ll need to keep an eye on how much charge is left.

Many of the better machines will allow you to use either option. That makes it easier for you – plug it in if you have the facilities or use the battery if you don’t.

Getting the Right Air Pressure

The underlying mechanism is pretty simple. The balls are loaded, and a fan sucks in the air. The air is filtered through a protective screen to prevent debris from getting into the motor. This filter will need to be replaced at regular intervals to prevent it from getting clogged.

Back to the actual motor again. The motor powers an electric fan that sucks the air into the machine. The air is directed into the canister of the machine. The balls are loaded into a hopper, and it is this that positions each ball correctly.

The balls are rotated into place using a set of wheels. In more advanced machines, the speed of these wheels can be adjusted to change the spin of the ball. Where a topspin is required, the upper wheel spins faster than the lower one.

They are then pushed into a smaller tube by the air. The ball will rest in a slight depression on the side of the tube. The narrowing of the tube from the canister causes an increase in pressure on the balls. The other end of the tube is closed off with a plastic flap to increase the pressure further.

The Pressure Propels the Balls Forward

Eventually, the pressure builds up enough that the ball shoots out of the barrel of the machine so that you can take a whack at it. Once the first ball has been released, the flap lifts and lets the next ball fall into place. This process is repeated until all the balls are finished.

It’s All About Timing

This process is carefully timed out, and the machine will repeat the actions at the specified intervals.

How fast the ball comes out depends on how quickly the pressure builds and how much pressure is allowed to build. If you set the machine at a slower setting, it will reduce the amount of pressure placed on the balls.

They’ll still be under high pressure, but this pressure setting will be lower than it would be at a higher setting, and the ball comes out slower.

Depending on how advanced the machine is, several alterations may come into play. These include, as mentioned above, changing the speed at which the wheels inside rotate. Creating a backspin or topspin is as simple as altering the rate at which each wheel turns. This is one of the main reasons why they are worth investing in.

If the top wheel spins faster than the bottom wheel, the ball gets some topspin. If it’s the other way around, it will have a backspin.

Adjusting the Height of the Shots

This is a pretty straight forward process. The tube that the balls are released from is raised or lowered to help change the angle of the shot. The more intense the angle upwards, the higher the shot will end up being.

Maintenance of the Machine

These machines are relatively low maintenance. Over time, the filter will become clogged and will need to be cleaned out or replaced. This process is usually simply a matter of replacing the foam piece.

The motor itself should be serviced from time to time to ensure that it’s running at optimal strength. This will usually be a simple matter of cleaning out any gunk that has accumulated and reoiling the moving parts.

The mechanics of the mechanism are actually pretty simple when you look at them. As long as the machine can draw power, there’s not a whole lot that can go wrong. It’s the calibration of the machine that might prove to be more of an issue.

The good news is that because these machines are so simple, they’re also easy to maintain. It is crucial to do adequate maintenance, however, or you risk damaging the machine or suboptimal performance.

If you decide to buy a machine, check what the manufacturer’s instructions regarding care and maintenance are.