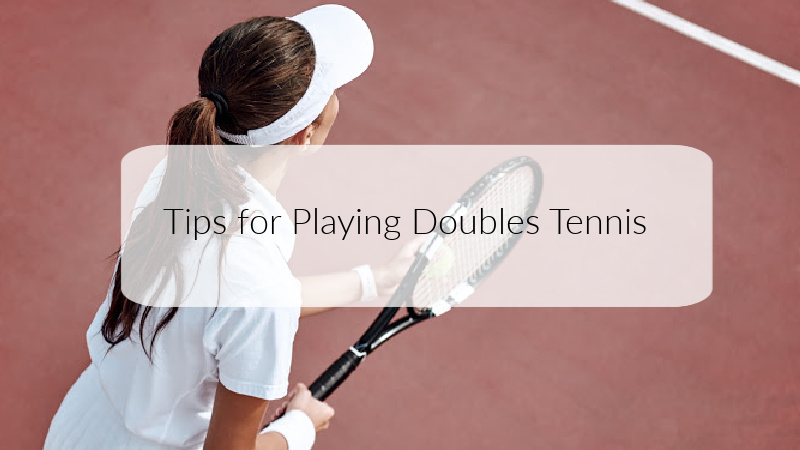 efore learning how to play tennis doubles, the rules of the game of singles tennis should be mastered first. But even once you have the fundamentals down, playing tennis doubles can be challenging and confusing for new and experienced players alike.

A game of tennis doubles is played between two pairs of opposing players with a few different rules to the singles games.

A player that is new to tennis doubles will need to get accustomed to the different sidelines, the sequence of serving, and the fact they will only be returning from one side of the court.

As you are playing with a partner as part of a team you will also need to synchronize your gameplay.

In this guide, we’ll cover all of the important aspects there are to mastering tennis doubles, which should significantly cut your learning curve.

How the Net Will Influence Your Game

Once you have the fundamentals of doubles tennis down, what comes next is to fine tune some important techniques to increase your chances on the court.

Controlling the net is regarded as far more important in doubles than in singles. This is due to the fact that it is much easier to score points at the net as you can make use of a greater variety of angles for your volleys. Additionally, the presence of an extra player on your team works to maximize the possible spaces on the court.

Take Advantage of the Weakest Player in Tennis Doubles

In order to gain a strategic advantage, many players in doubles matches will pressure the weakest player on the other side of the court. This pressure is applied by directing the flow of the game towards the weaker player, forcing them to react in a way that sets the pace of the match.

This psychological component of the game is key when it comes to securing victory in doubles matches, although it could be seen as slightly unfair!

In doubles, you can perform a lob and overhead move by hitting the ball at an angle so that when the ball is returned your partner can smash it back to the opposing team. Another option is to return the ball straight down the middle between the two players, which can take your opponents off guard.

The serve and return are known as the two most important shots in tennis. A key difference between a single and double match is that hitting the ball at an angle may not be the best tactic due to the presence of another player. Most seasoned tennis pros prefer to hit the ball straight, as it is rarely expected.

Although there are some differences in terms of tactics and raw game mechanics when playing tennis doubles, teamwork and communication are by far the most important variables to success.

To put it simply, if you do not synergize well with your teammate, then you have a very low likelihood of succeeding in a doubles match. For this reason, it is imperative that you find someone that you have an understanding with.

In addition to finding someone who you gel with, you should also discuss the various tactics and strategies that you’d like to employ before the match begins. By being open with your tennis partner, you’ll both be on the same page, as well as working in unison to execute on your game plan.

Despite the obvious similarities between singles and doubles tennis matches, there are definitely some nuanced differences between the two game types. Learning how to play doubles tennis can take years to master, with some people spending their entire tennis careers just learning how to synchronize their game with another player.

If you want to buy a good racket to play doubles with have a look at our guide here.

Like most things, learning how to play doubles tennis takes practice, patience, and more than a fair amount of tenacity — yet it can be mastered with the right coaching and attitude.