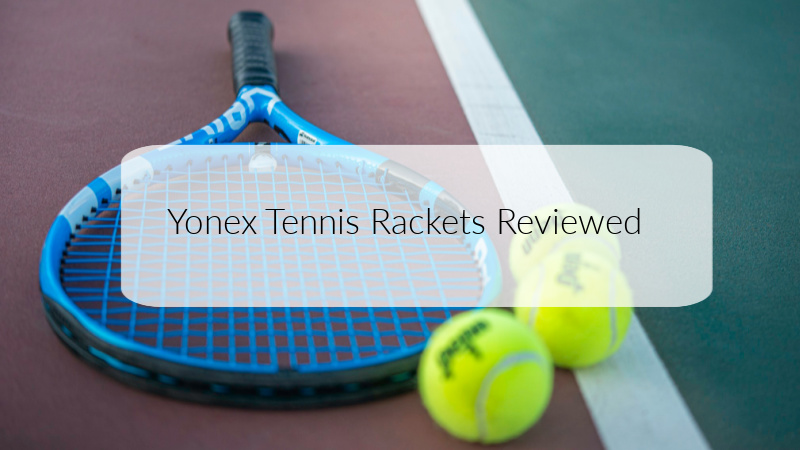 Yonex has a long history in racket sports, starting out as a Japanese badminton specialist in 1957, before launching its first aluminium tennis racket 25 years later.

Lleyton Hewitt, Monica Seles and Martina Hingis all won Grand Slams with Yonex rackets, and the company still makes some of the very best rackets on the market today.

It’s no real surprise that the brand retains loyal fans around the world, even in the face of stiff competition from companies like Wilson and Prince, who can boast greater name recognition.

Why Buy a Yonex Tennis Racket?

Yonex are a brand that make high-level design a standard in all their rackets and because of this they make some of the great racquets despite not being as well known as the likes of Wilson and Head. Every single one is equipped with their trademarked isometric head shape (as opposed to the traditional oval-shaped racket design that everyone else in the industry uses), which can increase the hitting area, or “sweet spot”, of a racket by anything up to 48%.

Add to that a raft of other trademarked design features, and you can see why Bernard Tomic, Stanislas Wawrinka, and Sabine Lisicki all favour Yonex rackets. Even better, these are advantages that Yonex don’t just hoard for their most exclusive, pro-level rackets. Even their junior and beginner offerings are built with the same care, attention and high-tech design. So, the real question is: Why wouldn’t you buy a Yonex racket?

Although a single brand, Yonex still have an awful lot of different rackets in their catalogue. Even within a single product line (such as the V Core), there will usually be half a dozen variants, including different weights and sizes, so it’s always sensible to try out a new racket before you buy. However, here are some great starting suggestions to help get your investigation going:

This excellent beginner to intermediate racket has everything you come to expect from a Yonex racket, from the signature isometric frame to the quake shut gel technology for extra comfort when striking the ball.

As ever, you get Yonex’s immediately recognizable isometric racket head, producing the big sweet spot their rackets are known for. As beginner rackets go, this is pretty large but reviewers say it has a great feel on volleys and is excellent for applying spin.

For a beginner who already has a powerful serve, this light, large-headed racket might be just the thing. It’s very forgiving for players still learning the game, but advanced enough that you won’t need to replace it for a good long while.

The favoured racket of Nick Kyrgios and Ana Ivanovic, the Ezone DR 98+ comes in two distinctive looks: black and blue, or the more eye-catching dark grey and lime. It has a mid-sized head, at 98 square inches, improved by a large sweet spot thanks to its isometric frame. The Ezone DR 98+ has spot-on accuracy, as well as top-level spin. The Dual Shut System also does an incredible job at reducing vibrations by 50% and cushioning the forces that are transferred through the racket into the arm when the ball is struck. Any regular players with elbow, arm or wrist conditions (such as Tennis Elbow) should give the DR 98+ serious consideration.

This is a versatile racket for someone who takes their tennis seriously. If you like to stomp your way through matches with the power of your serve, then there will be rackets out there better tailored to your style. But if you want the freedom to try things out and mix your game up, you can’t go far wrong with the Ezone DR 98+.

Endorsed by three-time Grand Slam winner, Stan Wawrinka, the Yonex VCore Pro 97 boasts a relatively compact racket head (97 square inches) that makes for quick handling and a fast swing. That speed comes with no trade off in stability thanks to some of the cutting-edge materials included in the frame’s construction. Yonex’s new substance, Namd (originally designed for use in aircraft), is used at strategic locations in the design, making the racket even more responsive. The isometric head remains a standout feature – as with all Yonex rackets – and the 16×9 string pattern allows for plenty of spin.

This is a great choice for advanced players and pros alike. It’s perfect for faster players who want pinpoint accuracy for their aggressive serves, and, once you get into the net, you have a good mix of stability and speed too.

Just because you only play tennis a couple of times a month doesn’t mean you should miss out on all the advantages of a pro tennis racket. This is where the extremely affordable, Yonex V Core SV Lite gets its moment to shine. Yonex Aero Fins will speed your swing by 2.9%, whilst the isometric racket design will let you enjoy the same enlarged hitting area as Stan Wawrinka. Coming in at 98 square inches, you still have a good-sized racket head, and the cutting-edge SV frame design grants you next level ball repulsion. A classic, open 16×9 string pattern means you’ll be able to add lots of spin to your shots too.

For the casual player who still wants to be competitive, the Yonex V Core SV Lite offers staggering design and build quality at a very affordable price.

This is a quality racket for a competitive junior, equipped with much of the high-tech design and materials contained in Yonex’s pro rackets. Their Aero Fins tech will reduce the air resistance on your swing, giving you more speed and power. Patented Nanometric XT Carbon in the upper portion of the frame keeps the racket light and responsive. Yonex’s signature isometric design creates a nice big sweet spot that even a professional would envy. Add to this, that the V Core 25 JR has a good head size for a junior racket (98 square inches), whilst still being significantly light, and comes with the reduced handle size needed by a younger player, and you know you’re really onto a winner.

A light, reduced-sized junior racket, with all the high-tech design needed by a pro. This is the perfect racket for a junior player already on track to becoming the world’s next tennis sensation.

You can’t go wrong with a Yonex racket. They’ve been making high-end tennis rackets for nearly forty years, and every single one of their rackets benefits from the core patented technologies that made loyal fans out of Grand Slam-winning athletes. Whatever your level, Yonex will have a racket that will make you feel like a pro.