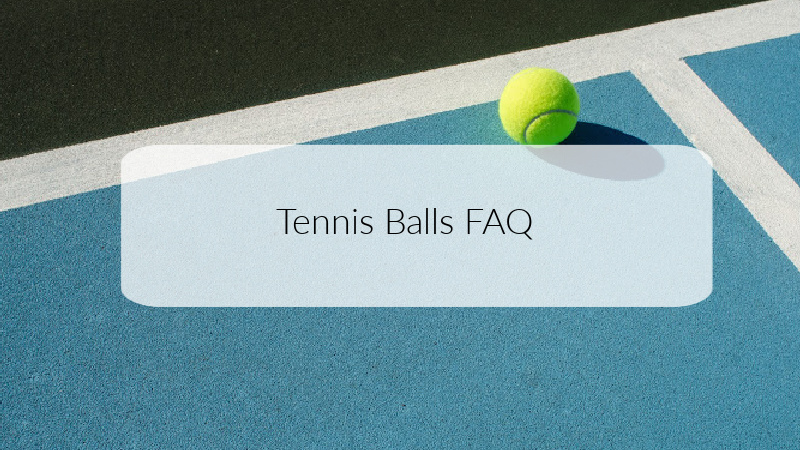 The tennis ball is arguably the most important piece of tennis equipment.  After all, without good tennis balls, there is no game!  This article will share some of the frequently asked questions that players have about tennis balls.

What color is a tennis ball and why?

The tennis balls used at major sporting events are almost always fluorescent yellow.  Officials have chosen this color because it is very easy for the human eye to track at high velocities.  Recreational tennis balls can any color.

How big is a tennis ball?

According to the International Tennis Federation, the standard size of a tennis ball is

What is the mass of a tennis ball?

How many types of tennis balls are there?

There are three main classes of tennis balls:

How are hard court tennis balls different to clay/grass court?

The only difference between hardcourt and clay or grass tennis balls relates to the quality of the felt.  Hardcourt balls will have thicker felt that is made from a combination of nylon and wool.  It also has a looser weave than soft-court balls.  The thick felt on hardcourt balls doesn’t wear away as quickly, which helps the ball retain its flight characteristics for a longer period.

Do tennis balls have different speeds?

If you are an amateur player, chances are you will mostly use Type 2 balls.  You can view a full list of officially sanctioned balls here.

Surprisingly, the answer is usually yes.  Female tennis players often use a “faster” ball in competitive matches.  This allows them to play an aggressive style of tennis because each shot will move at a faster velocity.  Men use a slower ball to slow the pace of those big serves and make the gameplay more varied.

The key difference between fast and slow is how much felt the balls have on them.  A ball with less felt will move faster through the air, while the opposite is true for balls with more felt.  A ball with more felt will also contact the strings for a longer period, making it “feel” heavier to the player when they play a shot.

In the U.S. Open, women will use regular-duty felt Wilson Balls, while men will use the fluffier extra-duty Wilson balls.  The balls have the same size, weight, bounce, and pressure — but they travel through the air at different speeds and feel different to hit because of the differences in felt.

The difference in regular-duty and heavy-duty balls is obvious to professional tennis players who spend many hours on the court.  However, amateur players might not even notice the difference between faster and slower balls.

It’s important to note that women don’t always use a different ball.  All players competing at the Wimbledon Championships will use the same ball type (regular-duty).

How far should a tennis ball bounce?

How do they make tennis balls?