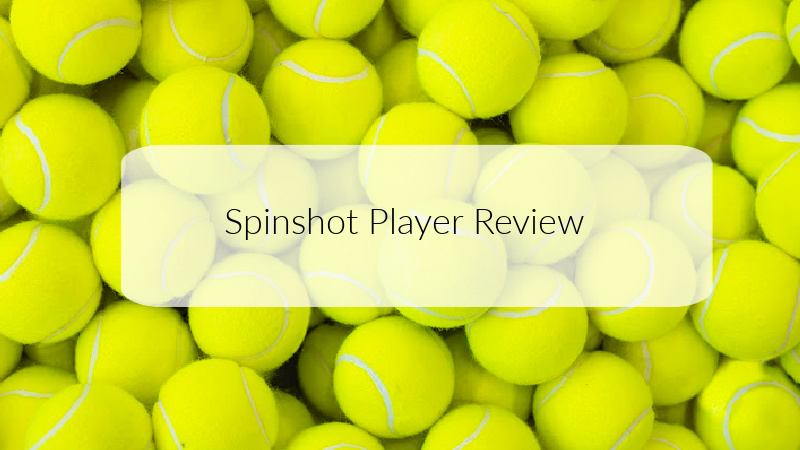 If you’re looking for a top end tennis ball machine, the Spinshot Player will not disappoint. 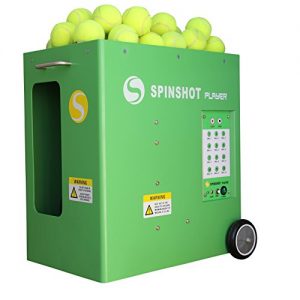 The machine boasts tons of unique features, including a wide variety of spin shots and compatibility with your smartphone. Fully customizable, the Spinshot Player mimics the experience of playing with a pro level tennis athlete.

If you want to learn more about the Spinshot Player’s features, keep reading!

If you’re after an all-singing, all-dancing machine, look no further than the Spinshot Player.

The machine offers almost every type oscillation a real player can make, allowing you to enjoy a realistic experience.

The machine comes in two models:

The battery and charger are included with the battery powered launcher, and a rechargeable power pack can be bought for the AC model for an additional charge.

One of the most innovative features of the Player is the ability to pair it with your smartphone. Replacing the traditional remote, your phone can be used to program your shots, speed, feed rate, angle, and height of the ball. Better still, this feature requires no additional charge.

The Spinshot Player offers custom programming, enabling you to feed in your customized drills.

With the battery connected, the machine weighs just 19kg. This low weight makes it easy to move the Player around the court.

The Spinshot Player has five key features that make it stand out. When using the machine, you can customize the speed of shots, the horizontal angle of shots, spin on the balls, shot height and feed interval. If you’re a beginner or intermediate tennis player, this is all you’ll need to improve your game.

When adjusted, the horizontal angle of shots can cover the full width of the court.

With a maximum speed of 68 mph, the speed range is comparable with more expensive machines.

The Player offers 9 different spin rates for topspins and backspins and a feed range broad enough to satisfy avid tennis players. While the ball capacity lags behind top-end models, the 120-ball hopper is more than enough to practice with. One of the best features of the Spinshot Player is the oscillation. Fully customizable, you can choose the settings that best suit your training requirements. For instance, if you need to practice more spin shots, program the machine from the control panel, your smartphone, or the remote and get ready for a challenge. With the Player, it’s also possible to control the intensity of the spin and enjoy other oscillations such as ‘all around the court’.

The Spinshot Player boasts 12 pre-programmable drills. Each one of these can be adjusted, totally reprogrammed or used as is. One drill is made up of six ball shots. Every shot in the drill can be programmed to suit your preference. If you like, you can even repeat the same shot again and again. If you want the realistic experience of a tennis game, you can leave the drills as they are and simply adjust the settings of each shot.

The thing that sets the Spinshot Player apart is its smartphone compatibility. When used on your phone, the Spinshot App mirrors the control panel on the physical machine. All you need to connect the two is a WiFi connection. The app is simple to use and allows you to control the machine from anywhere on the court. Similar to a standard remote, the app allows you to adjust the settings or pause the feeder whenever you wish. For the most part, the app is pretty user-friendly. It’s not quite as simple as other iPhone Apps, but it’s definitely better than carrying a traditional remote.

Traditionally, the elevation of a tennis ball machine is adjusted manually. The Spinshot Player, on the other hand, boasts electronic elevation control. Instead of adjusting the height with a manual knob, you can do so at the touch of a button on your smartphone or remote.

The new Spinshot Player comes with 2-Line function. With this feature, you can adjust the angle of the horizontal feed to become wider or narrower.

– Doesn’t Comes with a Battery

There are 2 models of the Spinshot Player: one powered by a battery and one by AC. The AC version has the capability to run from a power pack, too. However, this model doesn’t come with a battery. This means that you’ll have to purchase a battery separately before using the machine. While this isn’t the end of the world, it’s slightly annoying when you’re spending a decent amout of money.

If you’re new to tennis ball machines, you may have a bit of trouble getting your launcher set up. As the user manual isn’t very helpful, it may be easier to watch a tutorial elsewhere.

– Unable to Set Speed During Drills

One downside to the Player is the inability to set the exact speed of the shots. When programming the machine, you’ll need to work out which number relates to which speed. In the future, it would be great to be able to set exact speeds via the phone app.

Depending on the drills performed, the battery life of the Player is between 2 and 3 hours. As you can imagine, shorter feed interval and more speed result in lower battery life. While two hours may seem short, it’s probably the right amount of time for beginners and intermediate players. When you incorporate breaks for a drink and rest into the timing, the battery life should also satisfy more demanding players.

Unfortunately, the short battery life isn’t mirrored by a fast charge time. On average, the recharging takes between 8 and 15 hours. To make sure the machine is ready for your next session, remember to put it on charge as soon as you’ve finished playing. Providing that the machine is charging overnight, it should be ready to go by your next practice session.

Unlike many portable ball machines, the Spinshot Player is built from aluminum.

Despite not having a plastic frame, the machine is lightweight and portable. The towing wheels make it easy to maneuver around the court, and the light weight of 19 kg makes for easy lifting in and out of the car.

While the metal frame can seem like a disadvantage at first, it’s actually much more practical than a plastic construction. The aluminum cage is powder-coated to prevent rust, keeping the machine in top condition for years to come.

Additionally, the sturdy frame is much more stable on the court and can withstand hits from the ball better than plastic.

The dimensions of the Player are 50cm x 50 cm x 35cm, allowing players of all sizes transport the machine to and from the court.

Overall, the Spinshot Player has all the premium features you want in a tennis ball machine. With a good price tag you’re definitely getting your money’s worth with this very high qualty launcher.

Who Is It For?

With a wide variety of features and drills, the Spinshot Player is suitable for any tennis play who wants to improve their skills. With fully customizable settings, the machine can challenge even the most experienced athletes.

With tons of premium features, the Spinshot Player is probably one of the most reasonably priced launchers on the market. While it’s not the cheapest tennis ball machine out there, it still fits into the cheaper category.

The best thing about the machine is the variable oscillation.

With a top speed of 68 mph and 9 different spin rates for top spins and backspins, the Player can satisfy even the most avid tennis player.

The Spinshot Player is available in two different versions, one with a battery and one powered by AC. For the battery-powered machine, the battery is included in the initial cost; however, it will be packaged and sent separately.

The AC model doesn’t come with a battery, but a power module is available for an additional charge. The Spinshot app for your smartphone is totally free, so there will be no nasty surprises in that area.

When comparing the features of the Spinshot Player with similarly priced models, the Player is far superior to its competitors. With this in mind, the machine is a strong choice for any tennis player looking to up their game.