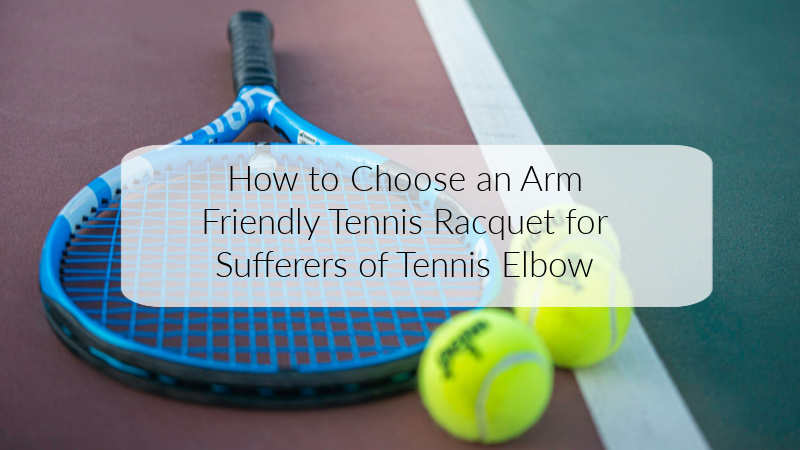 Nothing sucks the fun out of tennis quite like tennis elbow – It’s painful, hurts your performance, and can take weeks to heal.

It seems almost inevitable, though – close to half of tennis players get it at some point in their lives.

Tennis elbow, scientifically known as Lateral Epicondylitis, is an injury to the outer part of the elbow due to overuse.

Common symptoms include persistent pain and tenderness in the elbow and weakened grip. It can happen to anyone, but tennis players – who, by nature of the sport, use the same kind of motion repetitively during games or practice – are more vulnerable.

Tennis elbow isn’t difficult to treat; most cases just require weeks of rest. However, since we use our elbows so much in our everyday lives – opening doors, cooking, even just using our phones – it makes recovery a lot more challenging. As with any kind of sickness or injury, prevention is always better than the cure.

One of the biggest contributing factors to tennis elbow is the wrong racquet. The wrong racquet will not only affect your game performance, but it can also put a major strain on your arm.

What To Look For in a Good Arm-friendly Racquet

Every tennis player has a personal racquet preference. Some like powerful and heavy hard-hitting racquets, while others prefer racquets that give them more speed and flexibility.

There’s no one, single “best racquet,” even for those affected by tennis elbow. In general, however, there are a few things to look at when choosing the right racquet to prevent tennis elbow

Whether you are already experiencing some symptoms or you just want to make sure you don’t get it in the future, you want a racquet engineered for preventing tennis elbow. We detail the 3 best options below:

Our Top Picks For Sufferers Of Tennis Elbow

How do you make an already amazing racquet better? Ask Wilson. Their Blade 98 racquet was heavily praised by pro and amateur players alike for its aggressive, big hits and impressive stability on the court.

The Countervail model retains many of the features that made the Blade 98 an instant classic but with one significant improvement.

The Countervail technology was designed to reduce shock and cancel vibrations, protecting your wrist and elbow from injury even during intense volleys.

The Wilson Blade 98 CV comes in three different string pattern options, allowing you more control over how you want to play.

Considered one of the best racquets on the market today, the Yonex DR 98 boasts the perfect blend of stability, control, and power. The Quake Shut Gel is a particularly impressive feature which helps filter out unwanted vibrations going from the racquet and into your wrist and hand.

Many players say that it’s at a comfortable weight and flexibility, which makes it easier on the arms than most of its competitors. The Yonex DR 98 has a 16×19 open string pattern and comes already pre-strung.

The Prince Textreme Tour 95 is a racquet with a classic feel and great control. This is the racket of choice of many players who want a heftier feel than today’s popular lightweight frames. It has a stable base that allows you to make high-powered shots with each stroke while maintaining easy maneuverability and spin.

Some people say it packs a little less punch than other racquets, but it is incredibly arm-friendly and won’t put too much stress on your arm.

Many players turn to this racquet while recovering from tennis elbow, and some of them have never looked back.

What is Tennis Elbow?

Tennis Elbow is most commonly found in tennis players—however, it can result from any repetitive motion of the wrist including gripping, twisting, pounding, hammering, hedge-clipping, painting, using a screwdriver, even excessive texting, you get the picture… anything you do over and over again with your arms!

It occurs from damaging the tendons of the arm and its medical name is Lateral Epicondylitis. At the end of the Humerus bone are the Lateral Epicondyle and the Medial Epicondyle which are connected to the forearm by tendons which can become damaged from overuse.

You’ll notice you have Tennis Elbow when your elbow starts swelling, your forearm tingles and you get an electric surge of pain when you pick up an object. The moment you spot the symptoms of tennis elbow you must take action straight away to try to treat it.

It might be called tennis “elbow” but if it’s not treated you can also experience ssymptoms in your hands, wrists, and forearms, both on and off the court.

The symptoms and inflammation start gradually and it’s usually best to start any treatment as early as possible before real pain strikes. It is possible, if you know how, to treat tennis elbow at home, and we have listed a couple of ways that will most definitely ease the pain.

Before the pain becomes unbearable there are some symptoms that present themselves in the beginning. These include:

As it gets worse other signs might show up like the inability to move or bend your elbow, a misshapen looking elbow, or it starts to look and feel like there’s a fracture or broken bone. In this case, we suggest you speak to your medical advisor as a matter of urgency to avoid long-term and permanent damage.

If you have identified that what you believe to be tennis elbow, then there is some good news: tennis it is relatively easy to cure, and hopefully, you’ll be able to resume playing in just a few short weeks.

It should be noted that the below treatment methods are not designed to be used as a replacement for professional therapy.

If you are in severe pain, it is recommended that you speak to your doctor or physiotherapist.

Tennis elbow is caused by overuse of the elbow, which leads to a contracting of the muscles in the forearm. This causes stress in the tissue which eventually causes several tears in the outer muscle.

As time goes on the pain becomes more severe, and moves down to the arm and the wrist. Other than it being incredibly painful it can result in an inhibited use of the arm and permanent damage.

The most likely cause of tennis elbow for tennis players are:

The impact that you feel from the ball hitting the racquet causes vibrations that are transferred from your arm to the elbow. These repeated blows and contractions of the forearm muscles can lead to inflammation – and in the worst cases, degeneration of the delicate tissue outside of the elbow.

In summary, a good racquet for tennis elbow will traditionally sacrifice game performance for shock absorption. The two racquets we profiled do their best to mitigate this.